I’ve always liked Picasso and have successfully followed his style. I too can draw heads with noses for ears and mouths where the chin should be.

“Are you an artist?” a teenage boy asked me in the Picasso exhibition in the  Museum of Modern and Contemporary Art in Rabat. Photos were not allowed so the sketchbook had come out.

“No mate. I just dabble,” I said to the group which had expanded to three.

.”You are better than Picasso!” he said loudly looking at my misshapen guitar and Mr Squiggle head I’d drawn. His words drew in another dozen teenagers.

I told him that mine was worth 1 dirham and Picasso’s was a 1 with many zeros. I wrote this on the drawing to emphasise the relative worth of both Picasso’s and my doodles!

The crowd, which had now gathered to over twenty, squeezed in on my ever decreasing air to peer at my sketches. The writhing mass was threatening to topple a fine Picasso Spanish guitar made from chicken wire, corrugated iron and fencing wire. The mayhem caused the security guards to shuffle forward nervously.

They’d already had a difficult morning preventing 100 or more preschoolers from scribbling on the walls with their worksheet crayons and their concerned glances and the hubbub brought an adult of authority. His respected voice ushered the crowd away.

We wondered how the students and teachers in this country might have reacted to some of Picasso’s work.

One particularly revealing sketch was done in his later years when I guess he couldn’t give a stuff about what others thought. It was titled,” Man with a hat beside a woman in an inviting pose.”

I drew it hurriedly, my hand cupped around it like a school boy doing a test as I nervously scribbled the inviting bits but the gallery was now deserted. My fickle fans had a bus to catch.

Walking the medina of Rabat, I spied many brand name undies, Calvin Klein being the most prominent. I sent an email to a mate asking if he wanted some. Self correct on these devices is a wonderful thing. For once it comes out saying it more accurately than the original. The email said:

Do you want me to pick you up a pair of Calvin Kleim (correct spelling) undies. All genuine, ridgy dodge for $2.80.

Rabat’s fortress, the Kasbah les Oudaias, stands high on the south bank of the river. We took a stroll in the late afternoon past its massive door, through the village inside the walls, to the large courtyard overlooking the coast.

In this quiet place, young sweethearts held hands in corners, spoke softly by the stone wall and leaned on each other by the lookout.

Another gate opened onto the Andalusian Garden where a vigorous tom cat had been busy earlier in the spring. His progeny overran this lovely space.

You can’t judge a book by its cover in Morocco. The street might have a pile of rotting garbage in a corner waiting be collected. There is a strong odour coming from the drain in the street and the walls we walk by look as if no attention has been paid to them since the date above the doors. Ours says 1431. When we open the book, its a marvellous read! 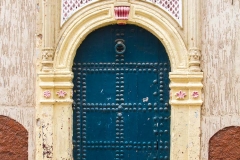 Rabat is an interesting place.

The riad porter’s veins in his neck just about popped as he heaved our two suitcases onto the roof rack of a beaten up Ford Laser. It was painted up in Meknes pale blue to remotely resemble a Petite Taxi. The seats were torn, the engine rattled and the windows were missing  winders, so we breathed the monoxide and settled back to await our fate.

We were catching the train to Rabat and I’d woken early to plan for our trip to the railway station, so I knew the general direction we should be heading. The scourge of taxi drivers is offline Google maps and after five minutes I began to suspiciously follow his route on the phone.

“Gare de Meknes? Pour Rabat?” I said in my best French that Salma, the receptionist, had taught me.

“Oui! Oui! Gare de Meknes!” he said karate chopping his hand repeatedly at the broken windscreen. He yanked the wheel and turned off the main road that led to Google’s station and drove up a busy street and caught us in a jam.

He sat on the horn and zigzagged and ran into roadworks and more choked traffic. The blue dot on Google indicated he was leading us to the wrong station.

“Gare de Meknes! Rabat!” I repeated more insistently as my fellow passenger patted my knee to soothe my growing agitation. The driver’s face in the mirror looked sheepish as I jabbed the phone and he quickly beeped at a car, turned the corner and deposited us at Gare Al Amir Abdul Kader, the wrong station! I was happy to be anywhere than in this blue bomb so we took our unsecured luggage from the roof.

I tossed a 20, the smallest I had, but he asked for more pointing at the meter.

In the best French I could muster in a fluster, with my finger waving around the streets, I said,

“Non! Non! Vous dodgiement taxi driver!” and flicked my fingers to wave him away.

It worked. He grinned sheepishly, shrugged and accepted my 20 but didn’t leave. Perhaps he was waiting for a fare to Gare de Meknes which lay another 4 dirhams away.

Please don’t call me a stingy miser. I’ve already classified myself as one.

She was right to pat my knee!